The small form-factor pluggable (SFP) is a compact, hot-pluggable network interface module used for both telecommunication and data communications applications. The form factor and electrical interface are specified by a multi-source agreement (MSA) under the auspices of the Small Form Factor Committee. It is a popular industry format jointly developed and supported by many network component vendors. The advantage of using SFPs instead of fixed interfaces (e.g. modular connectors in Ethernet switches) is that the interface port can be equipped with any suitable type of transceiver as needed.

An SFP interface on networking hardware is a modular (plug-and-play) slot for a media-specific transceiver in order to connect a fiber optic cable or sometimes a copper cable. SFP transceivers exist supporting synchronous optical networking (SONET), Gigabit Ethernet, Fibre Channel, PON, and other communications standards. At introduction, typical speeds were 1 Gbit/s for Ethernet SFPs and up to 4 Gbit/s for Fibre Channel SFP modules. In 2006, SFP+ specification brought speeds up to 10 Gbit/s and the SFP28 iteration is designed for speeds of 25 Gbit/s. The SFP replaced the larger GBIC in most applications, and has been referred to as a Mini-GBIC by some vendors.

A slightly larger sibling is the four-lane Quad Small Form-factor Pluggable (QSFP). The additional lanes allow for speeds 4 times their corresponding SFP. In 2014, the QSFP28 variant was published allowing speeds up to 100 Gbit/s. In 2019, the closely related QSFP56 was standardized doubling the top speeds to 200 Gbit/s with products already selling from major vendors. There are inexpensive adapters allowing SFP transceivers to be placed in a QSFP port.

Both a SFP-DD, which allows for 100 Gbit/s over two lanes, as well as a QSFP-DD specifications, which allows for 400 Gbit/s over eight lanes, have been published. These use a formfactor which is backwardly compatible to their respective predecessors. An alternative competing solution, the OSFP (Octal Small Format Pluggable) transceiver is also intended for 400 Gbit/s fiber optic links between network equipment via 8 × 50 Gbit/s electrical data lanes. It is slightly larger version than the QSFP formfactor which is capable of handling larger power outputs. The OSFP standard was initially announced on November 15, 2016. Its proponents say a low cost adapter will allow for QSFP module compatibility.

SFP transceivers are available with a variety of transmitter and receiver specifications, allowing users to select the appropriate transceiver for each link to provide the required optical reach over the available optical fiber type (e.g. multi-mode fiber or single-mode fiber). Transceivers are also designated by their transmission speed. SFP modules are commonly available in several different categories. 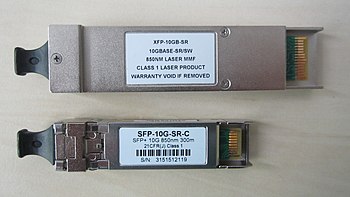 The SFP+ (enhanced small form-factor pluggable) is an enhanced version of the SFP that supports data rates up to 16 Gbit/s. The SFP+ specification was first published on May 9, 2006, and version 4.1 published on July 6, 2009. SFP+ supports 8 Gbit/s Fibre Channel, 10 Gigabit Ethernet and Optical Transport Network standard OTU2. It is a popular industry format supported by many network component vendors. Although the SFP+ standard does not include mention of 16 Gbit/s Fibre Channel, it can be used at this speed.

10 Gbit/s SFP+ modules are exactly the same dimensions as regular SFPs, allowing the equipment manufacturer to re-use existing physical designs for 24 and 48-port switches and modular line cards. In comparison to earlier XENPAK or XFP modules, SFP+ modules leave more circuitry to be implemented on the host board instead of inside the module. Through the use of an active electronic adapter, SFP+ modules may be used in older equipment with XENPAK ports [30] and X2 ports.

SFP+ modules can be described as limiting or linear types; this describes the functionality of the inbuilt electronics. Limiting SFP+ modules include a signal amplifier to re-shape the (degraded) received signal whereas linear ones do not. Linear modules are mainly used with the low bandwidth standards such as 10GBASE-LRM; otherwise, limiting modules are preferred.

SFP28 is a 25 Gbit/s interface which evolved from the 100 Gigabit Ethernet interface which is typically implemented with 4 by 25 Gbit/s data lanes. Identical in mechanical dimensions to SFP and SFP+, SFP28 implements one 28 Gbit/s lane accommodating 25 Gbit/s of data with encoding overhead.

The compact small form-factor pluggable (cSFP) is a version of SFP with the same mechanical form factor allowing two independent bidirectional channels per port. It is used primarily to increase port density and decrease fiber usage per port.

The small form-factor pluggable double density (SFP-DD) multi source agreement is a new standard for doubling port density. According to the SFD-DD MSA website: “Network equipment based on the SFP-DD will support legacy SFP modules and cables, and new double density products.”

Quad Small Form-factor Pluggable (QSFP) transceivers are available with a variety of transmitter and receiver types, allowing users to select the appropriate transceiver for each link to provide the required optical reach over multi-mode or single-mode fiber.

The QSFP28 standard is designed to carry 100 Gigabit Ethernet, EDR InfiniBand, or 32G Fibre Channel. Sometimes this transceiver type is also referred to as “QSFP100” or “100G QSFP” for sake of simplicity.

QSFP56 is designed to carry 200 Gigabit Ethernet, HDR InfiniBand, or 64G Fibre Channel. The biggest enhancement is that QSFP56 uses four-level pulse-amplitude modulation (PAM-4) instead of non-return-to-zero (NRZ). It uses the same physical specifications as QSFP28 (SFF-8665), with electrical specifications from SFF-8024 and revision 2.10a of SFF-8636. Sometimes this transceiver type is referred to as “200G QSFP” for sake of simplicity.

SFP sockets are found in Ethernet switches, routers, firewalls and network interface cards. They are used in Fibre Channel host adapters and storage equipment. Because of their low cost, low profile, and ability to provide a connection to different types of optical fiber, SFP provides such equipment with enhanced flexibility.

The SFP transceiver is not standardized by any official standards body, but rather is specified by a multi-source agreement (MSA) among competing manufacturers. The SFP was designed after the GBIC interface, and allows greater port density (number of transceivers per given area) than the GBIC, which is why SFP is also known as mini-GBIC.

However, as a practical matter, some networking equipment manufacturers engage in vendor lock-in practices whereby they deliberately break compatibility with “generic” SFPs by adding a check in the device’s firmware that will enable only the vendor’s own modules. Third-party SFP manufacturers have introduced SFPs with EEPROMs which may be programmed to match any vendor ID. 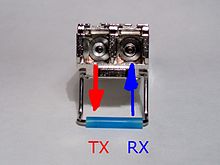 Front view of SFP module with integrated LC connector. The blue extraction lever indicates the module is designed for use with single-mode optical fiber. 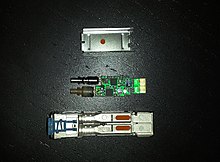 The SFP transceiver contains a printed circuit board with an edge connector with 20 pads that mate on the rear with the SFP electrical connector in the host system. The QSFP has 38 pads including 4 high-speed transmit data pairs and 4 high-speed receive data pairs. 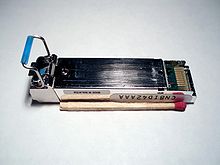 The physical dimensions of the SFP transceiver (and its subsequent faster variants) are narrower than the later QSFP counterparts, which allows for SFP transceivers to be placed in QSFP ports via an inexpensive adapter. Both are smaller than the XFP transceiver.

The SFP MSA defines a 256-byte memory map into an EEPROM describing the transceiver’s capabilities, standard interfaces, manufacturer, and other information, which is accessible over a serial I²C interface at the 8-bit address 1010000X (A0h).